Let’s begin for those of you that may not know how technology has advanced into the electronic digital watch era .

What is a Smart Watch?

A smartwatch or smart watch, is a computerized wristwatch with functionality that is enhanced beyond timekeeping, and is often comparable to a personal digital assistant (PDA) device. While early models can perform basic tasks, such as calculations, translations, and game-playing, modern smartwatches are effectively wearable computers. Many smartwatches run mobile apps, while a smaller number of models run a mobile operating system and function as portable media players, offering playback of FM radio, audio, and video files to the user via a Bluetooth headset. Some smartphone models, (also called watch phones) feature full mobile phone capability, and can make or answer phone calls.

Such devices may include features such as a camera, accelerometer, thermometer, altimeter, barometer, compass, chronograph, calculator, cell phone, touch screen, GPS navigation, Map display, graphical display, speaker, scheduler, watch, SDcards that are recognized as a mass storage device by a computer, etc. and Rechargeable battery. It may communicate with a wireless headset, heads-up display, insulin pump, microphone,modem, or other devices.

Like other computers, a smartwatch may collect information from internal or external sensors. It may control, or retrieve data from, other instruments or computers. It may support wireless technologies like Bluetooth, Wi-Fi, and GPS. However, it is possible a “wristwatch computer” may just serve as a front end for a remote system, as in the case of watches utilizing cellular technology or Wi-Fi.

What was the first Smart Watch?

History gives credit to the Pulsar brand for pioneering digital watches with digital displays and calculating functional features in the early 1970’s.

This is how they looked… 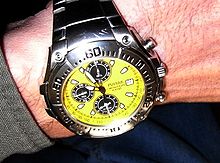 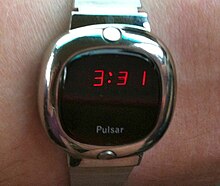 The newer Smart Watches offer a variety of features that simply amaze you with their functions. They are available for both men and women. They are styles that fit sport or business.

The current leader in the consumer market is the Pebble brand. This brand is favorable due its pricing , functions, and software upgrading capabilities. (Priced from $100.00 up)

I share with you some of their available offerings