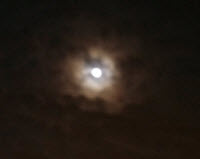 As I was working this evening, I stepped outside to gaze upon what distinctly is the Final Full Moon of 2013. As I pierced my view upward into the clouded skies, there was the moon peeking through the clouds. It wasn’t a large full moon that we typically see due to its distance to earth at this time. It was small in comparison but it was still the same moon that hoovers in the universe that we see from time to time. It was so mystic in its essence. Even though it was small it still had “character”.

I captured a few short stills with my phone camera…..ALLOW ME TO SHARE

1.  The Most Distant and Visually Fullest Small Moon of 2013

2.  Tonight’s Full Moon rides high for northern hemisphere residents towards local midnight. But the “Long Night’s Moon” of 2013 is rather lackluster in terms of declination. While it’s the northernmost Full Moon of 2013 at a declination of +18.7 degrees, it’s a far cry from the maximum declination of +28.72 degrees (the angle of the ecliptic plus the tilt of the Moon’s orbit) that it can achieve. This only occurs every 18.6 years and last occurred in 2006 and will happen again around 2025. We’re currently headed towards a shallow minimum for the Moon’s orbit in 2015. Ancient European and Native American cultures both knew of this cycle of high-flying moons.

3. The passing of the Full Moon also means it will be entering into the morning sky.

4. China’s Chang’E-3 spacecraft landed on the Moon just outside of the Bay of Rainbows (Sinus Iridum) near Montes Recti in the northern section of the Mare Imbrium on Saturday, December 14th. The landing site is visible now on the lunar nearside. Look for the Sinus Iridum as a wide crescent scarp, a sort of “notch” in the top of Mare Imbrium.

So when is the next full moon?  It is hard to precisely predict.

It takes the moon about 27.3 days to travel it’s complete orbit around the earth and it’s moon phase cycle is 29.53 days. With the months being 28 to 31 days long it makes the Full Moon and New Moon fall on a different day of the month every year and rather difficult to keep track of.