I logged on to my computer today to research information I wanted to share with you today and I discovered some content regarding chemtrails . I began my due diligence to prepare this information for you and I have been amazed at my findings. So let me begin with a disclaimer.

*The information I will share with you today is not fact or myth, it is awareness. It is a collective of information shared. It is not of intent to make a statement against anyone or organization.*

So let’s begin with a conceived definition of “chemtrails”

The term chemtrail is a portmanteau of the words “chemical” and “trail,” just as contrail is a contraction of “condensation trail.” The term does not refer to other forms of aerial spraying such as agricultural spraying (‘crop dusting’), cloud seeding, skywriting, or aerial firefighting.[4] The term specifically refers to aerial trails allegedly caused by the systematic high-altitude release of chemical substances not found in ordinary contrails, resulting in the appearance of characteristic sky tracks.

Let’s keep in mind that in some  cases of providing “awareness”, it is not always what we don’t see but in a case as such as this what we see but don’t know….But let’s be mindful and collect your own information as I did.

Before I began to write this article I took a brief moment and stepped outside to collect my thoughts. As I looked up in the sky, this is what I saw from my home. A jet passing overhead and in the sky behind it chemtrails everywhere. 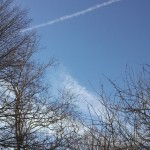 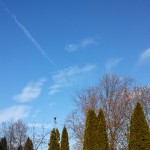 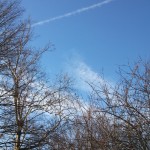 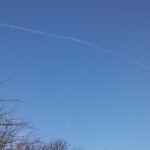 There are several voices that have spoke out on this subject of chemtrails. The chemtrail conspiracy theory posts that some trails left by aircraft are chemical or biological agents deliberately sprayed at high altitudes for purposes undisclosed to the general public and directed by various government officials.[1] This theory is not accepted by the scientific community, which states that they are just normal contrails, as there is no scientific evidence supporting the chemtrail theory.

I have discovered an organization that I want to share with you that have been very diligent in their efforts to share chemtrails awareness.

I thank you for allowing me to share this information to increase your Chemtrails Awareness.